Haitian police used tear gas and live ammunition in dispersing protesters from the capital on Friday. The protesters demand President Jovenel resignation as widespread food and fuel shortages continue to hit the country.  Other complaints lodged by the protesters include double-digit inflation, a weakening currency and corruption accusations against public officials. Many of the protesters now want the President to step down for failing to address the rising problems facing the country.

Friday protests were among the largest and most violent ever to be witnessed in months. Angry crowds looted a number of stores, banks and money transfer offices, pharmacies and ATMs in the wealthier neighborhoods of Delmas and Petion Ville. The crowd also set buildings on fire while stripping the abandoned police station in Cite Soleil, Port au-Princes poorest neighborhood of sheet metal, roofing, police protection equipment and furniture. In recent clashes, four people lost their lives.

Steven Edgard, one of the protesters said, “We did not want the police to come out of their base because this is a unit that fired real bullets at the people, used tear gas grenades when all people want is to be respected. Now people are taking whatever they can to make houses better because they are tired of getting soaked when it rains.”

Haitian opposition leaders pledged that there would be no peace until Mr. Moise who took office in 2017 steps down from his position. One of the opposition leaders Senator Youri Latortue told Radio Caraibes “if Jovenel doesn’t resign today, whatever happens to him is not our responsibility… Jovenel Moise will be held accountable for everything that happens in the country today.” 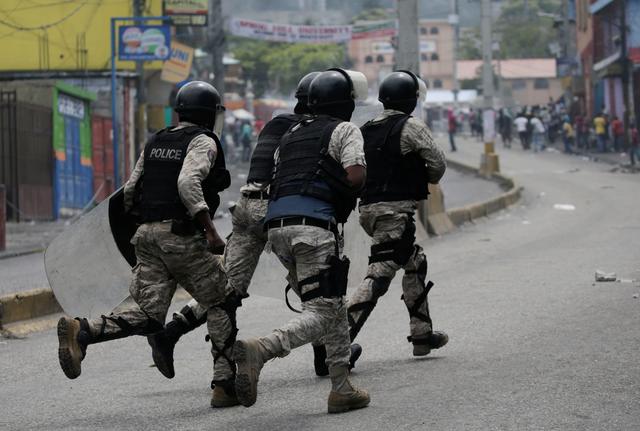 Haiti has witnessed months of protests over the government’s reluctance to investigate accusations that Mr. Moise’s close allies had wasted billions of money in proceeds from a Venezuelan program to aid Haiti with subsidized oil. The protests have been followed by strikes and violent clashes as the government as found it hard in importing enough fuel to meet the country’s daily needs.

“We are telling the people who live in the Cite Soleil area and the Haitian population to rise up to overthrow this government because President Jovenel Moise is not doing anything for us, just killing us,” said Francis Pericat, a protester.  The latest protests come after a week-long shutdown of vital services that has damaged the nation’s ailing economy and shaken the president’s already tenuous position.

For nearly three weeks, leaders of the opposition parties have sent groups of young men onto the streets to enforce a shutdown of businesses and public services, which opposition leaders pledged, would continue over the weekend. In an attempt to calm down the situation, Moise replaced several security officials after calls from human rights groups to remove people they accused of involvement in a massacre in the poor La Saline neighborhood. He also cancelled his speech at the United Nations General Assembly this week and made a rare address to the nation.